Weekend Round Up: 8-9th June

This weekend both Track Athletes and Road Runners were in action. Saturday saw the SOS athletes take to the roads of Bohermeen for their annual 5km road race. This event always proves to be a popular event and is one of the Meath Road Race Series. The great weather added to the wonderful atmosphere on the night.

SOS turned out in force. With the clubs top athletes turning up for the occassion. The Senior Men stole the show with the reliable forces of Colin Costello, Andrew Coscoran and Eoin Callaghan, joined by new club member Kieron Peters, taking the four man Team Prize.  This team along with the likes of Cormac Costello, Mark Hoey and Robert Tully (who were absent last night), will definately be the team to beat throughout the Road Race and Cross Country season. Congrats to all of our athletes who ran – i’m still waiting to hear all results. 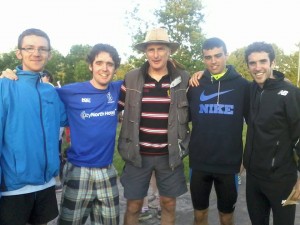 Earlier in the day Nic Benoit took to the roads also …. this time for a little longer in the Mourne Way half Marathon. Nic finished in a time of 2hrs and 26minutes, in what would have been a hot day in Ireland!Well done Nic – check out facebook for his pics of the day.

Sunday saw Robert Tully take to the track in the AAI Games – an event that always brings out the top names in Irish Athletics. With Santry as the venue – a normally quick track, and the 20 degrees heat, good times were bound to happen – and that they did. Rob took to the start line of the Mens 800m, and held his form throughout and finished in a brilliant new pb of 1min 51.97 seconds. A great time for the start of the track season. His quick time earned him 4th position.

Best of luck to all the athletes competiting over the next week – Fixtures are as follows: